Yes!! Aside from those Dragons in Game of Thrones - I eagerly await series 7 - My latest book with prominent red Dragon will be published in the summer of 2017. There is no Dragon in this story written by the new and dynamic author, Lou Carter. A story within stories, jiggling with delight amidst many familiar characters and one determined Dragon. More smoke signals nearer the publishing date. 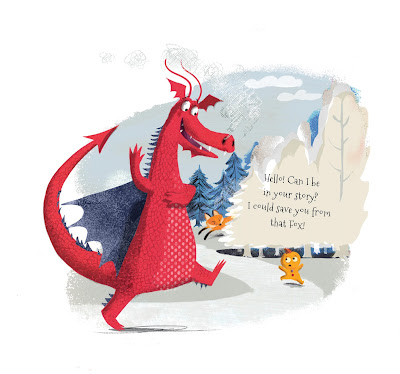 Many extraordinary people and organisations have been working towards supporting refugees and raising awareness about asylum seekers. Without doubt this year will be one that has shown all too many tragic scenes of families on treacherous journeys to safer lands. Some of these journeys have been documented and illustrated with great poignancy. The Vietnamese - Australian artist, Matt Huynh created these dramatic scenes to tell Nam Le's story in The Boat. 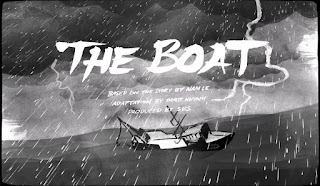 In the recent London Illustration Fair I saw the exhibition Where do we go from here?Amazing line drawings, works made by Nick Ellwood as he spent time in the refugee camps of Calais over the winter of 2015. 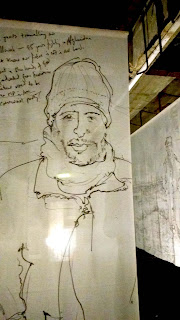 One of my fellow studio mates has been busy founding a new fund raising mission for refugees, originally through Calaid and now in the wake of clearing the Jungle in Calais the funding continues wherever food and clothing can be distributed in Europe. The fund is called The Kindness Tree and my small part in this was to design the logo. The Kindness Tree is made possible by creating collection trees in schools throughout the UK. See the little video for more info! I hope to post more about this project next year.

Just to add to the good work, here is a story illustrated by the very talented Sydney based artist Nancy Liang. I've long admired her work which here demonstrates an immersive way of telling Junko Morimoto's story, a survivor of Hiroshima in Junko's Story. 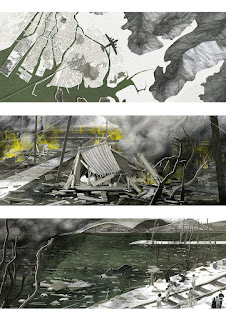 There have also been some triumphs on bringing our attention to old forgotten stories, such as the event organised by a friend about the Ladies Bridge or Waterloo bridge in London. Built by female construction workers during the second world war and here documented.

This year I visited the Bologna Book Fair! Never have I experienced so many kilometres of books! Simply overwhelming and inspiring I will never be the same and yet might return in 2017. 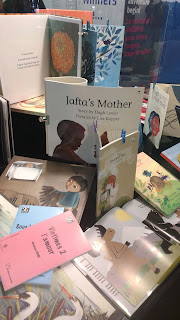 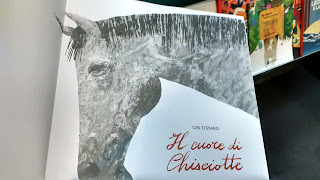 There was much hilarity and fun in big knickers for Hooray for Knickers with the author(s) Jill Lewis aka Jill and Alison ( we also made Don't Read This Book ).

There was hide and seek when Lola visited our studio and resident dog Betty went into hiding! 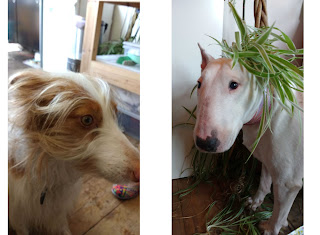 I built a cardboard treasure chest... 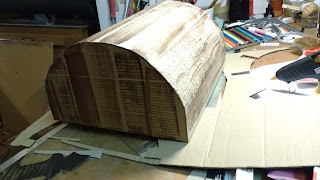 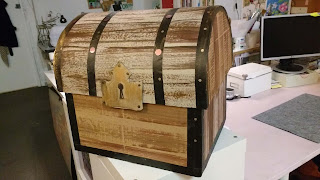 and there were those many school visits 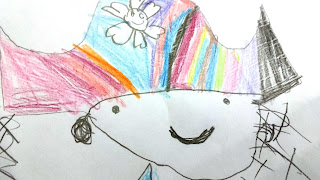 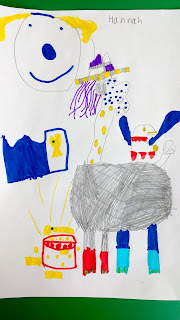 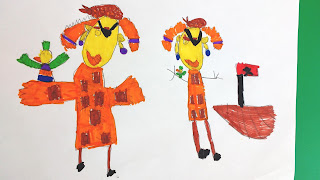 I collected some words that might see me through 2017... 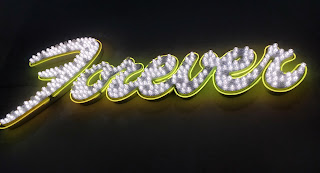 
Posted by Deborah Allwright at 10:06 No comments:

I am very excited to visit One Tree Books in Petersfield Friday 8th April to judge their book marks competition!
The shop window already looks dazzling with all the brightly coloured bookmarks on display.
Please come and see for yourselves. 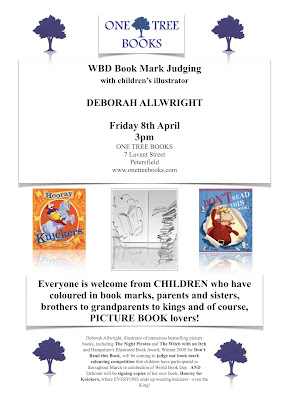 Posted by Deborah Allwright at 09:39 No comments:


Thank you Mudwaffler A brilliant blog bursting with the latest picture book reviews and gorgeous artwork. Click on the link.

Posted by Deborah Allwright at 10:11 No comments: 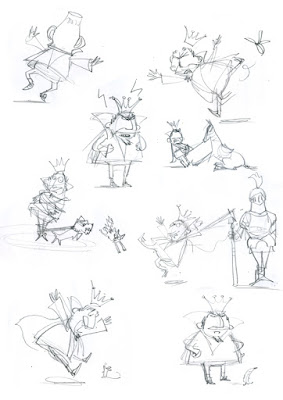 Let's doff our caps adieu to 2015 and welcome in the New Year.
It certainly was very busy and I failed to post much on the blog- again!
Without further ado here's some sketches of a forth coming book which features a rather emotionally explosive character, King Grumpy.
I loved drawing him and as the story unfolds, we appreciate the reasons for his tantrums... 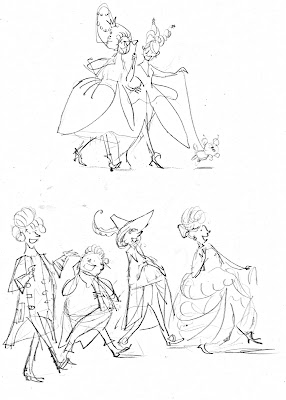 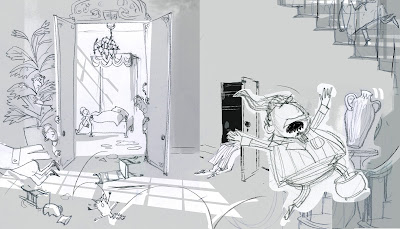 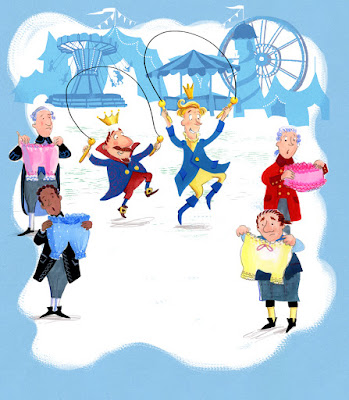 Posted by Deborah Allwright at 10:41 No comments: 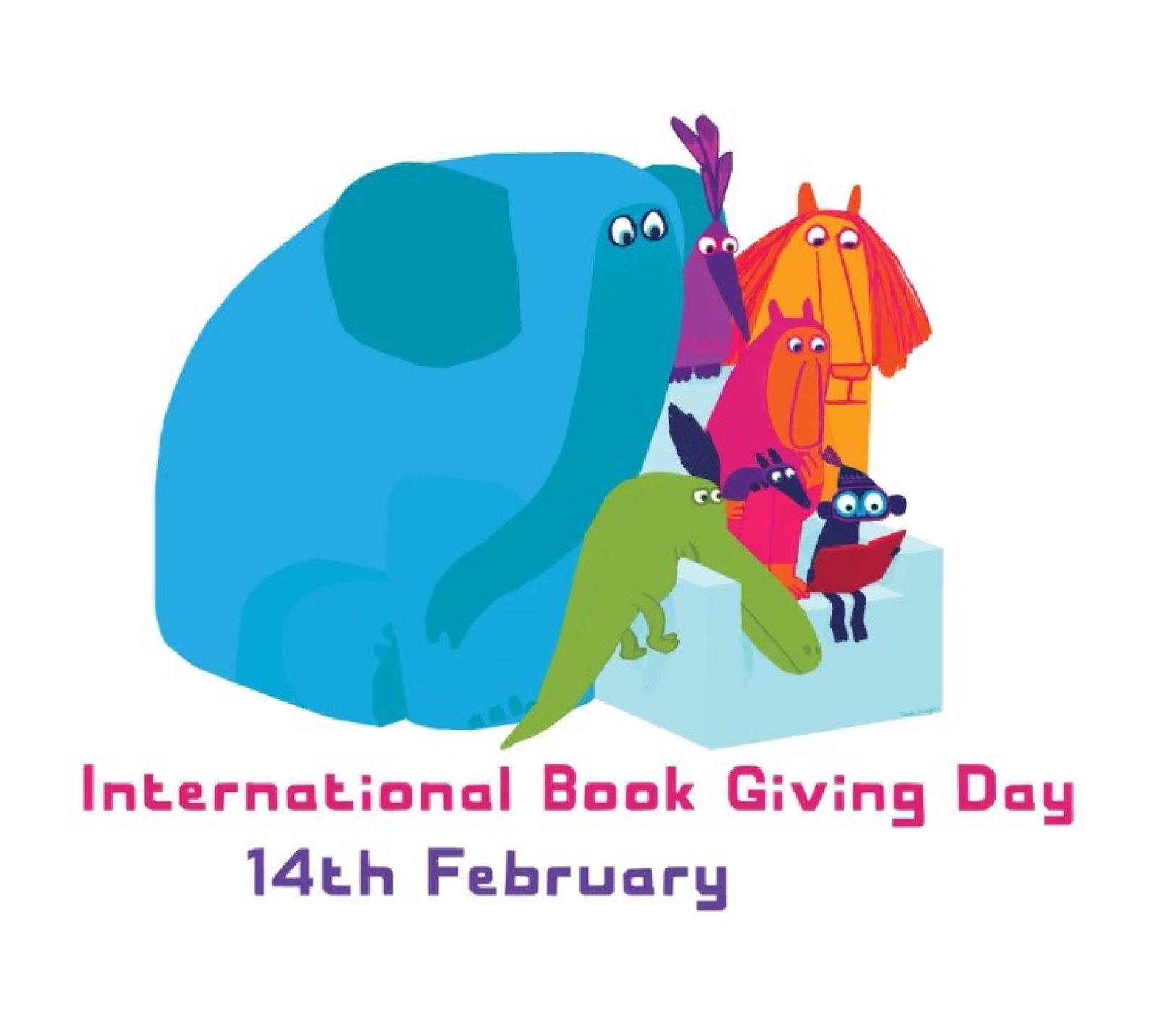 The Night Pirates on Stage 2017

Deborah Allwright
I started drawing when very small and never ever stopped. This fascination with drawing, painting, cutting and sticking has resulted in rather a lot of work and luckily more than 40 children's picture books published far and wide. The inspiration starts with the many authors whose stories allow me licence to mess with their words, so a big thank you to all of them!

There Is No Dragon In This Story

The Witch with an Itch

Accessories to pull out & play 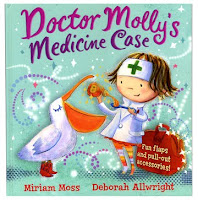 New Covers for these bedtime faves